growing up in the Bay Area, a trip to San Francisco was always a celebrated event. i remember being a little pipsqueak in the streets of Chinatown & trying my first {and last} steamed pork bun.
it was spongey. dense. meaty.  …different.
since then, and since becoming a pescatarian, i never thought twice about this bun or baozi in general again…… until today, that is.

i went to Out The Door for lunch with my buddy Courtney and ordered the vegetarian curry special…. and swayed by Court’s order (imperial rolls + one steamed chicken bun) i decided to go crazy and throw in one steamed vegetarian bun for shits & giggles.

it was deeeeeeeeeelish! way better than the curry. way better than i remembered/expected. and a perfect little bulbous package of hot mushrooms, noodles + greens for only $3!

throw in some soy sauce and sriracha (in packet-form!!!)

and i’ve found myself my new favorite Ferry Building lunch! 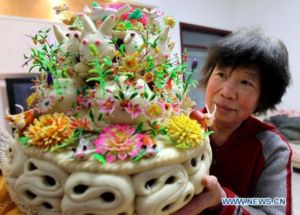 View all posts by KaylanS